Where is my order? Check Here

A Welcomed Ray of Sunshine

That is the first thing that popped into my head when I saw these classic mod party kits:

After daydreaming about beautiful diamond rings and New York City for a good minute, the next thing that came to mind was that little phrase:

Sound familiar?  Well, that’s probably because I’ve already mentioned it in a previous post…Or, maybe it’s because this is a pretty popular phrase around weddings.  Who knows?  Either way, this phrase inspired the name for this week’s featured mod party kit.  As for this week’s project, I was inspired by Pinterest.  I could go on for days about Pinterest, so I’ll save all of that for another post.  Long story short: it’s fun, has the potential to be a very good business tool, and it’s a great place to find/share creative ideas.  I also watched Breakfast at Tiffany’s during the brainstorming period of this project to try and spark some ideas.  It’s one of my favorite movies and favorite theme idea for everything from special events to home decor.  How could I not watch it?  It wouldn’t be fair to say that I didn’t get any ideas at all, but oddly enough that lightbulb over my head never went on while immersed in the world of Holly Golightly.

The funny thing about that little lightbulb is that no matter how hard you try, it just won’t turn on until it’s good and ready.  That time came at 6:30 am one sunshine-y morning while I was relaxing before I got out of my PJ’s.  Recently, “me-time” has become my morning ritual.  Sometimes I read, sometimes I write, and sometimes I’ll even clean or do laundry.  On this particular morning, I decided to spend my coveted completely-alone-time on Pinterest.  Believe it or not, this precious little poster that a friend had pinned was the switch to my lightbulb: 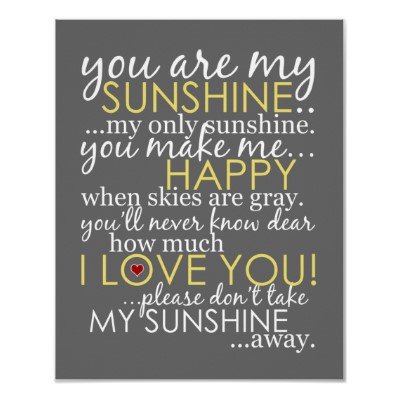 After I saw this, the image I had in my mind became clearer and clearer and all of the ideas I had gathered came together.

The diamond ring in the party kit.  The ending scene from Breakfast at Tiffany’s.  I won’t ruin it for those who haven’t seen it, but I will tell you that in this particular scene it’s raining.  Rain falls from sky.  Sun is in the sky.  Sky is blue.  Party kit is blue.  Sun is yellow.  Yellow would go great with blue.  So on and so forth…

Now, the moment you have been waiting for.  The final result of all my brainstorming: 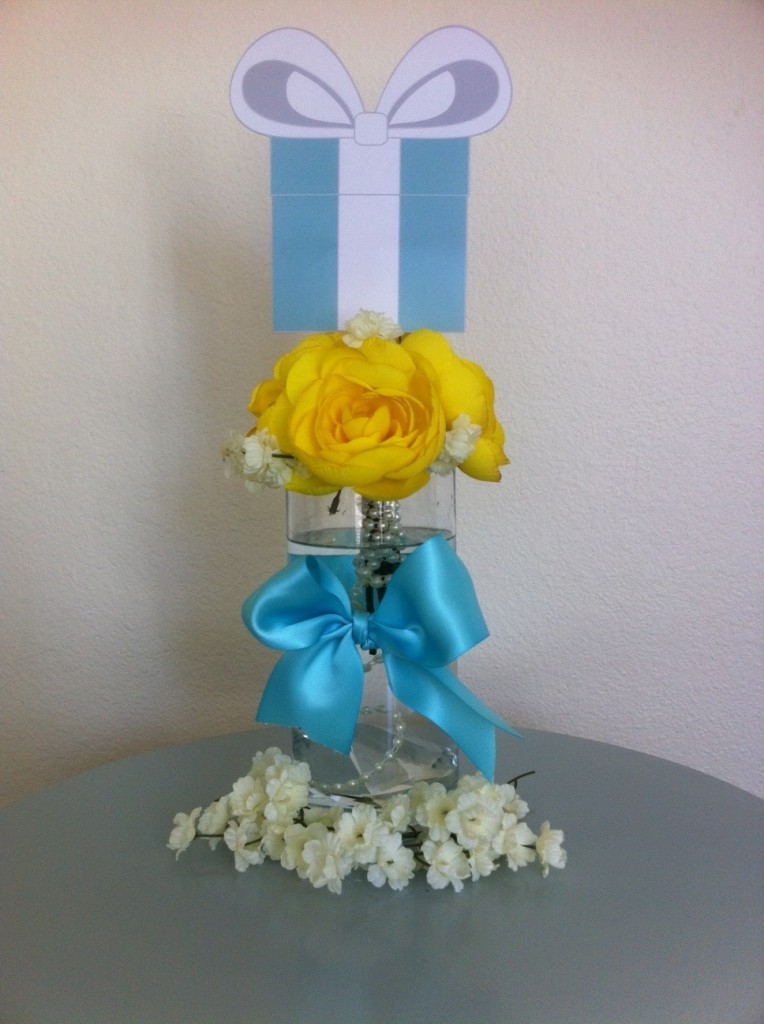 Here’s how I incorporated all of those elements I mentioned into these bright, yet simple centerpieces perfect for your upcoming engagement party or bridal shower:

I wanted the yellow to stand out (easy) but not overwhelm (not always very easy), so I picked out about five full yellow flowers to create a sun-shaped bundle at the top.  I am not a florist and have no idea what I’m doing as far as real flowers go, so forgive me for not knowing the names of these fake flowers.  I added in the smaller white blooms to accent the bouquet and to make it look a little fuller.  Also, don’t forget the party icon from the mod party kit! 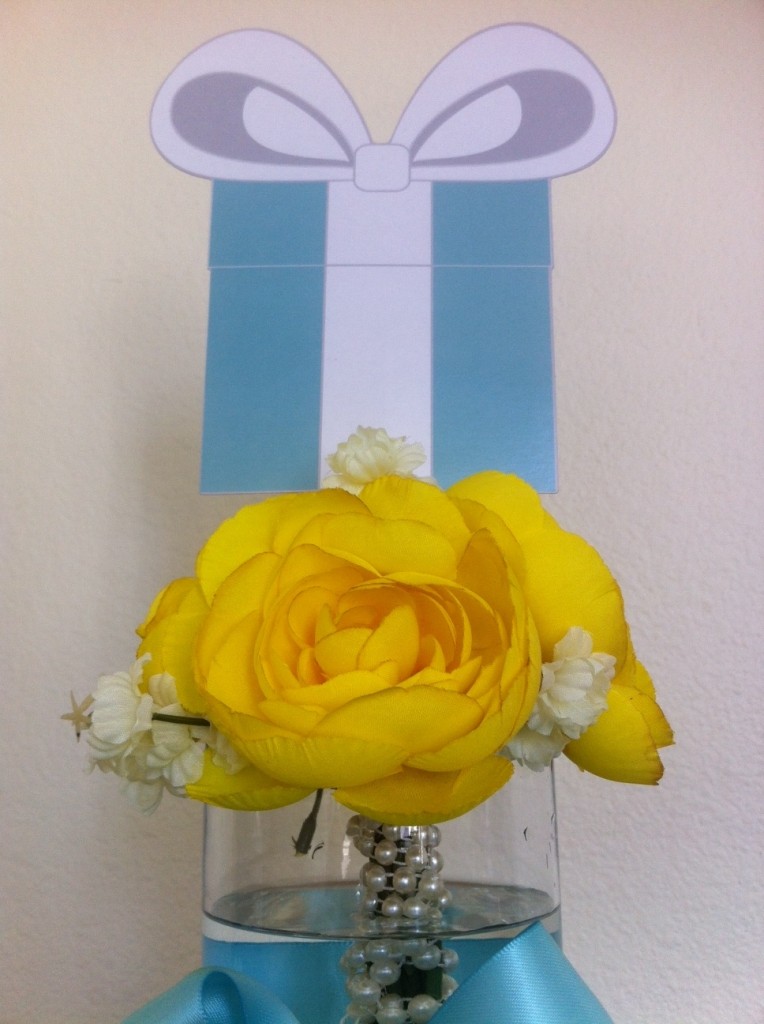 Using florist tape, I taped the stems and the party icon together then wrapped it in a strand of fake pearls allowing the excess to hang freely.  Before putting the bouquet in the vase, I put in a couple of our medium sized diamond paperweights and added water for effect. 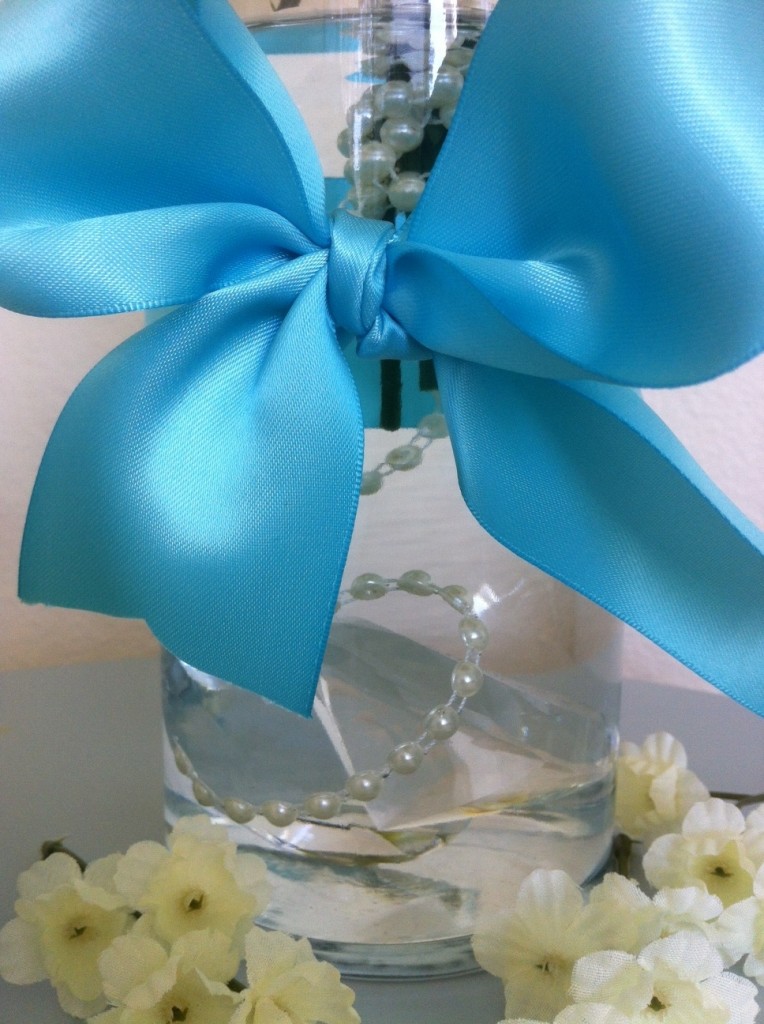 The paperweights aren’t as visible as I would have liked them to be, so I would suggest either a lightly tinted vase or having some colored linen underneath the centerpiece.  The final touch was the aqua blue bow around the vase and placing some extra white blossoms at the base.  *Note: tie the bow before you put anything in the vase.  All supplies not Event Blossom brand were purchased at the local craft store, except for the vase.  The vase was borrowed from my home.

This sky, rain, and sunshine combo also comes to mind when I think about weddings and marriage.  At the risk of sounding totally cheesy, allow me to express one little tidbit I have on the people we choose to marry.  I’ll sum it up in this one question: Shouldn’t this person be there for you through all the stormy weather and be the sunshine that comes after?  The short version of my complicated answer is absolutely, yes.  Call me a hopeless romantic, that’s just me.  But the people who are the sunshine in your life aren’t limited to spouses or significant others.  Family, friends, pets, that stranger who smiled at you, the neighbor who wished you a good morning — any of these folks can bring those warm, fuzzy rays into your life that make it just a little brighter even if only for a few seconds.  You know what else can brighten up your day?  A cupcake.  Especially this cupcake:

You know where to find the recipe for these little blue and yellow presents…Sugar Therapy!

Who or what brings sunshine into your life??  Don’t be shy!